Freezefire is a alien transformation from the series, Brandon 10.

Freezefire is a humanoid alien with rocky, red skin that has multiple cracks showing off his interior substance which is balanced between a bright yellow and cool blue. His head is practically a floating, red skull encased in a frozen flame which connects it to his neck collar. He has two toes on his feet and the Omnitrix symbol is centered on his chest.

His skin begins to charcoal around his hand as the device merges into his arm. The changes to his hand spread up his arm and across his body until he has red-ish, hard-like skin which then starts to crack revealing hot, yellow substances in his left arm and cold, blue substances in his right arm. Both substances equally balanced in the center of the face plate now on his chest or in the middle. His head is then devoured in a flame leaving behind only his red-ish, hard skinned cranium and lower jaw as the flame is instantly frozen over. Now fully transformed, Freezefire then strikes a pose.

Freezefire has the ability to blast fire and ice projectiles in different forms, whether they are fireballs or ice beams or something else all-together. He is also resistant to extreme temperatures, both hot and cold. Using the force of his blasts, he can elevate himself into the air and use his beams to hover and surf around. Freezefire can also absorb fire into his hands and freeze objects upon touch. He's also very nimble.

His weakness is usually fire extinguishing items and ice melting items such as water or extreme heat. Depending on which side he's using, Freezefire will be most affected by that certain item. 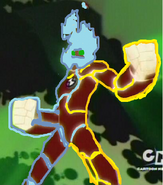 Freezefire in The Original Series Titles 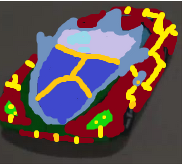 The Go-Kart with Freezefire DNA
Community content is available under CC-BY-SA unless otherwise noted.