Frankenstrike is the Infinity's DNA samle of a Transylian from the planet Anur Transyl in Bryce Bowman: Origins.

Frankenstrike has an appearance similar to the classic depiction of Boris Karloff's version of Victor Frankenstein's monster.

He has a muscular body and a human nose. He has greenish-grey skin, a black mullet hairstyle with brown at the end, sideburns, and two tower-like conductor coils on his back.

He has stitch-like lines on his arms (right arm: half of his shoulder and left arm: halfway from his glove). He has metallic, grey gloves with his fingers showing.

He has black bolts, each on either side of his neck.

Frankenstrike wears a metallic belt with a large buckle in the center of his waist.

The Infinity appears on his belt, as part of the buckle.

Pure white electricity flows from the Infinity and travels up to Bryce's eyes, morphing them into sharp, totally blue eyes. The electricity strikes his back, causing two Tesla towers to form and extend upward. Metallic gloves and belt are formed by the lightning, then it quickly swirls around his legs, beefing them up before covering them in black fabric and grey, metal shoes. Frankenstrike poses with his arms down and head back. Ominous music plays as lightning surges between the towers and his open palms.

Frankenstrike was scanned into the Infinity in Frankenstein's Experiment when Dr. Viktor touched the Infinity while fighting Shockquatch.

In Friend of My Enemy, Frankenstrike briefly fought Amsol before he escaped.

In Darkness in the Air, Frankenstrike defeated the Mummy fairly easily before switching to Wolfsbane to fight off Dr. Viktor.

Frankenstrike has two conductor coils on his back that allow him to generate and manipulate green lightning and electromagnetism.

He can emit powerful lightning bolts and emit magnetism from his hands or his feet, allowing him to attach to metal structures.

Frankenstrike can survive in the vacuum of space.

Frankenstrike can connect himself to machines and then control them via technokinesis.

In Bryce Bowman: Omnistorm, Frankenstrike was seen using a stream of lightning to pull himself onto Vilgax's ship.

The two generators on Frankenstrike's shoulders are the source of his electricity, which means opponents like Phil can also absorb his electricity through them. 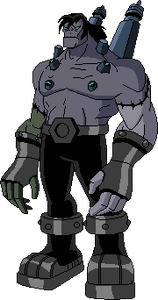 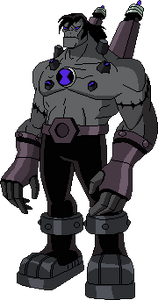 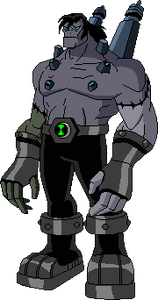 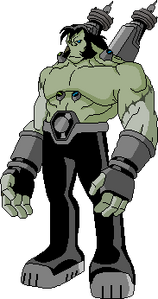 John Spacewalker as "Viktor Stein" in Monster of the Earth