Ben 10 Fan Fiction Wiki
Register
Don't have an account?
Sign In
Advertisement
in: UltiVerse, Aliens, Ben 10: Protector of the Omniverse,
and 13 more

Four Arms is the Infinimatrix's DNA sample of a Tetramand from the planet Khoros in Ben 10: Protector of the Omniverse. He is the Timeline 1 equivalent of the canon Four Arms.

Four Arms has his Heroes United appearance, but the black stripe on his forehead is longer, going past his eyes. He has more spikes on his arms and his ponytail is now gone.

Ben hovers in a dark green background, with light green bubbles pulsating rapidly behind him, as he crouches down. His skeletal structure increases greatly, with him becoming 10 feet tall and more muscular. His skin turns red as his eyes split into four and become fully green, changing shape. The hair on his head disappears and a stripe grows in between his eyes and on his chin. His ring and pinky fingers merge into one as two more arms grow above his waist. Gold cuffs form around his wrists, along with fingerless gloves on his hands. Spikes grow on his arms. His clothes disappear and two sashes appear on his torso, starting from his shoulders and cross in an 'X' shape. The Infinimatrix symbol pops out of his chest. Four Arms spreads his arms and flexes his muscles, completing the transformation.

Four Arms' most prominent ability is his enhanced strength, being able to lift several times his own weight and punch through various resilient materials with ease. Technically speaking, Four Arms is physically stronger than Methanosians and Vaxasaurians at base size.

Four Arms' strength allows him to use anything heavy as a weapon, from big rocks he can throw several feet away, to beams and pillars that can be used as clubs. His great strength even extends to his jaws and bite, allowing him to bite metal and damage it. He even develops to two sharp fangs between his lower jaws as he gets older.

The older Four Arms grows, the stronger he becomes.

Four Arms can create strong shockwaves by clapping all four of his hands together. Ben learned this ability from Tini.

Four Arms can alternatively create shockwaves by slamming his fists on the ground.

Four Arms can jump several times his own height, at least seven stories up, in a single bound.

Four Arms can climb up walls by pushing his fingers into them to make hand holds.

Four Arms has a high level of enhanced durability due to his tough and thorny skin.

In correlation to his durable skin, Four Arms is highly resistant to fire, such as that generated by a Pyronite. His skin also makes him laser-proof.

When infected with a cold, Four Arms can sneeze out sprays of slimy snot from his mouth, and although disgusting, this can be useful against insects.

Four Arms' bulk can sometimes become a disadvantage, as all the extra muscle mass makes him relatively slower than other opponents and his immense size makes him an easy target for enemy attacks.

Four Arms can feel pain from electricity, such as those generated by Nosedeenians and Gimlinopithecus.

If under the effects of a cold, Four Arms' strength and stamina are severely reduced, his skin turns from bright red to a dark shade of orange, and he develops pungent hives in his armpits.

Four Arms can feel great discomfort while being attacked by a swarm of ants. 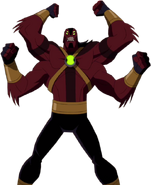