Four Arms is the Omnitrix's 1.5 DNA sample of a Tetramand from Khoros in Ben 10: Omnitrix Unlimited. He is the Dimension 1 equivalent of Four Arms.

Before the Omnitrix's 1.5 recalibration in Ben 10: Across the 23rd Dimension, Four Arms had his Omniverse appearance.

Negative Four Arms has Four Arms' Heroes United appearance, but his skin is dark pink, his belt, wrist and leg bands, as well as the sashes, are silver and his ponytail is white. 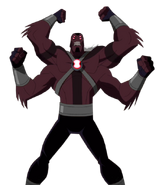