Four Arms is the Omnitrix's DNA sample of a Tetramand from the planet Khoros in Earth-1010.

Four Arms is a 12 foot tall humanoid with crimson skin and four arms. He has four eyes and no nose. The Omnitrix symbol is on a belt around his waist.

Four Arms' most prominent ability is his enhanced strength, being able to lift several times his own weight and punch through various resilient materials with ease. His strength allows him to use anything heavy as a weapon, from big rocks he can throw several feet away, to beams and pillars that can be used as clubs.

Four Arms is resilient to high temperatures, but not immune.

Four Arms' bulk is sometimes a disadvantage; all the extra muscle mass makes him relatively slower than other opponents, and his size, likewise, makes using things, or moving through areas designed for smaller species difficult. His immense size also makes him an easy target for enemy attacks.

Four Arms was later used by Ben Prime using the Delta Omnitrix to attack Timekiller, however he missed every strike. Ultimately he was tricked into attacking Time Breaker Ben causing the timeline to reset. 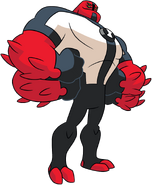