Foulfly has a bug/insect body and 4 insect-like flat legs and two arms, whose hands are human-style. Foulfly has big wings and his clothes are blue and spread only till his forehead. He has lime green skin, the Atomnitrix symbol is placed on his forehead, he has pupils, and his body and tail are bigger than a human child.

Foulfly can excrete high pressured streams of liquid from the pollen ducts located inside of his eye stalks and mouth. These liquids have a vast range of forms, from a flammible toxin to an immobilizing jelly.

Foulfly can fire blue lasers from his eyes.

Foulfly's tail is extremely sharp and can slice through steel with little effort.

Foulfly is extremely weak to any chemical, poison or gas.

Although his exoskeleton body is fairly strong, Foulfly's wings are fragile. Water is especially a problem for Foulfly, as it can render him incapable of flight if too much gets on his wings. Furthermore, he is unable to swim due to the small surface area of his limbs.

A more minor inconvenience is Foulfly's odor, so hiding from anything or anyone that can smell can be a problem. 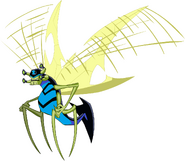 Original Foulfly Design
Add an image to this gallery
Retrieved from "https://ben10fanfiction.fandom.com/wiki/Foulfly?oldid=894413"
Community content is available under CC-BY-SA unless otherwise noted.