The Forever Knights are an organization of knights, based on Earth in Bryce Bowman: Origins.

Not much is known about the Knights prior to their first appearance in Nemesis Returns, but we do know that they made it their mission to defend Earth from alien threats. This mission has been twisted over the years into a bloodlust for aliens, as well as acquiring alien technology and reverse engineering it for their own purposes.

In Nemesis Returns, the Knights were attacked by Nemevoc and helped Bryce find him.

In Change of Plans, the Knights were attacked by the Esoterica, and defended by Bryce, Gwen, and Kevin.

In The Knight's Challenge, the Knights turned their focus from the Esoterica to fighting Bryce because he refused to let them kill their Esoterica attackers. This led to Enoch challenging Bryce to a duel. 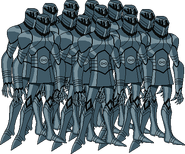