Forestfire is a Xylopyron from the planet Incendiebois in Simien 10: Polyverse and Simien 10: Blood Monkey. This is a redone version of the original page, Forestfire.

Forestfire looks like a short tree with seven root legs and his face in his torso. He has a jack-o-lantern expression on his face, and his eyes and mouth are burning on the inside. His arms have little flames, and he has leaf "hair" with a little flame on it too. His back is fully covered with leaves.

In Blood Monkey, Forestfire speaks in continual all caps, due to his insanity.

Forestfire can stretch his limbs almost infinitely, He can ignite his arms or root legs while they are stretching, making him potentially deadly if he wraps up someone.

Forestfire can control the growth of plants and control their movement telepathically.

Forestfire's skin is rather durable.

Forestfire's obvious weakness is water, which can shut down his flames. Being underwater can block his fire abilities, and if his eyes and mouth flames are completely extinguished, he will die. 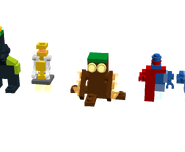