Fly Trap is the Atomnitrix's DNA sample of a Florauna from the planets Flors Verdance and Xenon.

He has green colored patches on his hands. He has pods on his back that can either be used as explosives or smoke bombs. He has one blue eye in the middle of his face. He wears the Atomnitrix on his chest and speaks in a voice comparable to a 1960s-era hippie.

Fly Trap can grow and retract his body and merge with plant life. He can also grow vines to trap others, which appear to be his fingers coming off.

Fly Trap can grow seeds on his back that contain a whole host of substances (lethal and non-lethal).

Fly Trap can grow thorns on his body.

Fly Trap is immune to the effects of gases, such as flame retardant. 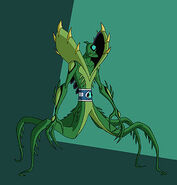 Fly Trap's Old Design
Add an image to this gallery
Retrieved from "https://ben10fanfiction.fandom.com/wiki/Fly_Trap?oldid=894412"
Community content is available under CC-BY-SA unless otherwise noted.