FlameOgre's body is a small, yellow wisp. He projects fire in all directions and then manipluates it into a body.  The Infinity appears on his chest.

A burst of fire erupts from the Infinity, spiraling around Bryce's arm and then rushing up his neck and through his hair. FlameOgre's eyes blink through the flames, then he flies forward in a twister of fire. He stops, reshapes himself into his normal appearance and poses.

Azmuth unlocked FlameOgre in the Infinity in The Darkest Night: Part Two.

In ​Rogue, FlameOgre was used to defeat multiple soldiers that were defending The Mother of Invention.

FlameOgre's most prominent power is his Pyrokinesis. Since his species doesn't have an actual body, the little yellow ball ignites the particles around him when he first transforms to create a flame body. If no particles are around to light, he can project fire to create a body.

He can launch fire from any part of his body, but Bryce will most of the time do it from his hands.

The yellow "ball" is actually a wisp of odd, living energy so most attacks will go straight through him. This makes it seem like he is entirely made of fire.

FlameOgre can manipulate fire that is not his body, and use it to his advantage.

He can create weapons of fire to wield, although we are not sure how he makes them solid.

Being made of fire and totally in conrol of his body, FlameOgre can fly. His speeds are not fantastic, but it's still better than walking.

He has some amount of enhanced strength, though nothing amazing. It could be compared to Heatblast. This meaning he is stronger than Bryce, but he can't lift a car.

Although his physical body is "intangible", water can be used to put out his body. The wisp can try to start another fire, but it would take time.

For an unknown reason, his body is weak to electrical currents. We have not explored this in the series.

Certain species of aliens, such as Ectonurites, can touch his body, due to being intangible themselves. 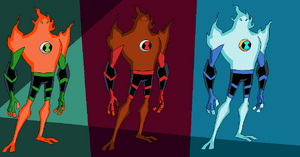