Fisix is a new alien in 3.10: The Last Generation.

Fisix is a ball, about the size and shape of a basketball. He has a cap with multiple colors of blue, and a blue cap over his mouth with three oval holes in it, which he uses to talk. He wears the DNAtrix on his cap.

Fisix has a high intelligence,(smarter than Brainstorm, but not as smart as Grey Matter) and can float to move around. He can also pick up smaller objects about the same size as him with his floaty powers.

Fisix can be picked up and thrown around, or be kidnapped.

Fisix is Sem's new intelligence alien in 3.10, since Brainstorm,Ultimate Brainstorm and Grey Matter are underused in 3.10. 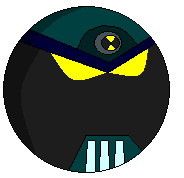 Fisix, drawn in Brian's style.
Add an image to this gallery
Retrieved from "https://ben10fanfiction.fandom.com/wiki/Fisix?oldid=865377"
Community content is available under CC-BY-SA unless otherwise noted.