The Feuer are an alien species originating from Earth-83. They also appear to exist in the Mack 10 and Charles 10 timelines.

The Feuer live on a planet known as Brandstelle, which is a planet mostly covered in massive ice caps, with only the land of the equator remaining unfrozen. This 'Habitable Belt' is where most of the planet's life emerged, though a good number would later migrate to the ice caps and evolve into species that could survive in the cold.

The Feuer were one of these species, though instead of evolving to suit the landscape, they changed the landscape to suit them, terraforming it using their fire abilities into a more acceptable environment. A good number of Feuer still live in the Habitable Belt, but the amount of valuable geological resources buried under the ice caps has prompted mass-migration in the hopes of striking gold (or, in this case, Taydenite). 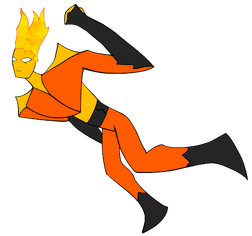 The Feuer are a race of tall humanoid aliens with golden skin. Their head has a constantly lit stream of fire coming from it, which only goes out if the Feuer in question is dead. Their eye color slowly changes as they age, with newborns having dark red eyes, children having bright orange eyes, teens having yellow eyes, and adults having white eyes.

Their typical clothing is a standard mining uniform, which consists of a bright orange jumpsuit that exposes their mid-torso. The extremities of the uniform are color-coded to indicate what position the Feuer inquestion has. The most common color is dark grey, indicating an average miner.

The Feuer are natural masters of fire, producing a special gas that ignites when it comes into contact with the air. In addition to producing their own fire, they are able to control already-existing flames, manipulating them as they wish.

This Pyrokinesis allows them to fly via fire 'jets' they create at the ends of their arms and legs.

In addition to their normal fire, they are able to produce a 'Healing Fire' made up of special chemicals that burn at extremely low temperatures, making them safe to touch. These chemicals also serve to stimulate the healing process in organic materials, making injuries heal almost instantaneously.

When enraged or in serious danger, a Feuer's body temperature will instantly double, changing their skin to a fiery blue and enhancing their fire production and control to extreme levels. Their uniforms are generally designed to work with this 'form change', changing to a dark blue material that can resist these high temperatures.

Having such a naturally high body temperature makes the Feuer prone to hypothermia if they are unable to produce fire for whatever reason.

In addition, whenever they go through their form change, they are unable to produce the chemicals necessary for their Healing Fire.

Retrieved from "https://ben10fanfiction.fandom.com/wiki/Feuer?oldid=728794"
Community content is available under CC-BY-SA unless otherwise noted.