Feedback is the Infinity's DNA sample of a Conductoid from the planet Teslavorr in Bryce Bowman: Origins.

Feedback has one blue eye in the middle of his head.

He has two antennae and a tail that feature plugs on their tips that allows him to draw energy to himself.

He has four fingers on each hand with similar plugs on the tip of each finger.

Feedback has only two front toes.

He has silver battery bolts on his shoulders, arms and hips.

The Infinity glows brilliantly on Bryce's wrist, as a blue stream of energy spirals around his forearm and then flows up toward his head. The energy glides over Bryce's face, merging his eyes into one, then it cascades off the back of his head sprouting two black antennae that reach all the way down to the ground. The energy sparks at the end of the antennae, leaving behind silver plugs. Energy continues down his right arm and over his hand, leaving silver bolts on his shoulders and forearms and plugs on the tips of his fingers. He shoots a stream of energy from his fingers, and catches it with his antennae. Feedback poses with one hand outstretched and the other beside his face, fingers curled holding blue energy in each palm.

In The Girl of His Dreams, Feedback fought Sunder before switching to Diamondhead.

In The Alliance (BBO), Feedback fought Zombozo, the Circus Freaks, and Vulkanus for a short time before switching to Diamondhead.

In Price of Fame, Feedbakc fought Hex after absorbing an attack meant for Marissa.

In Last Laugh (BBO), Feedback absorbs electricity from Megawhatts, putting them to sleep.

In Frankenstein's Experiment, Feedback was used to fight some Esoterica.

In Monster of the Earth, Feedback absorbs and releases energy from the tentacle of Gaia, then later releases it to fire an energy blast that causes John Smith as Granodite and Gaia to teleport off.

In Back With a Vengeance (BBO), Feedback briefly takes on Vilgax and Kevin before changing to Everglade.

Feedback has the ability to absorb and redirect any kind of energy, including mana. This ability is refined to the point that Feedback can redirect energy at near-point-blank range. He absorbs energy through the conductors on his antennae, tail, and fingers.

Feedback can use stored energy to generate electrical charges, which can be used as ranged attacks or to empower his punches. Feedback can also fire energy balls by joining his fingers.

Feedback is also able to stretch the plugs on his head, hips, and hands for more range.

Feedback can "smell" radio signals by using his antennae.

Feedback needs to absorb energy from time to time to fight, because the energy contained within him will deplete with use. 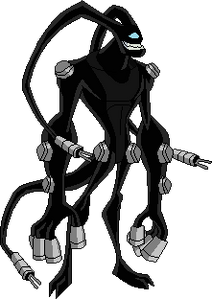 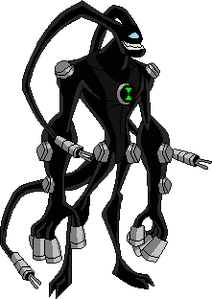 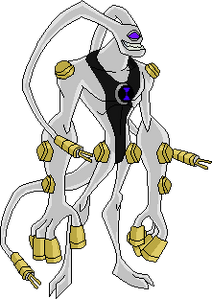