Faucet is the Omnitrix's DNA sample of a Lytrasapien from the planet Lutra.

Faucet appears like a tall humanoid otter. He has four fingers on each hand, and a thin body frame designed for swimming. To this effect, his clothing also resembles a swimsuit. The Omnitrix symbol is on his chest.

Faucet's main power is his ability to manipulate water around him, like a form of telekinesis. This works better when the water is moved in smooth or circular motions as sharp turns in the flow can cause his control over it to break.

He also possesses the ability to exert this control over other liquids, however this can take time and/or training and is easier if the liquid is water-based.

Faucet is an incredibly powerful swimmer. On top of this, Faucet can swim in fresh and salt water equally and is not bothered by the chlorine content of chlorinated pools.

He is stronger than an average human and can jump higher.

Faucet cannot generate his own water, and must rely on water from around him.

Faucet is a free use alien, feel free to use him in your own series. 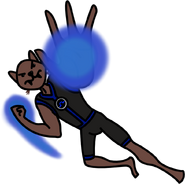