Fanfare is the Omnitrix's DNA sample of an unidentified Kerotops droid from the Schwarzsi Anomaly in Earth-1010.

Fanfare is a mechanical humanoid with very limited features. His spherical head has a large marking down the front middle, going up to his forehead, and a second continuous marking that runs most of the way around his head at eye level. The second marking starts and ends just shy of connecting to the first marking.

His hands end in large turbine-like fingers. He has three sharp fingers on each hand, shaped like fan blades. Despite their appearance, they can bend inwards and are fully articulate- allowing his hands to grasp properly. His 'palms- contain strange mouth-like orifices each with three 'teeth'. His hands can spin 360* around the wrist rapidly.

He also has a tail with the same, albeit smaller, hand on its end. He has digitigrade legs. The Omnitrix symbol is on his chest.

Fanfare's main ability is his aerokinesis. Using the rotary blades on his hands and tail, he can manipulate air flow around him to an incredible precise amount. He can use this to lift himself up similar to a helicopter as a limited form of flight. The simplicity of this ability belies its potentially devastating applications.

Fanfare possesses an advanced form of echolocation that allows him to see his surroundings in three dimensions. This echolocation also shows him air flows around him, from which he can also gather the general temperature. He can also detect changes in the density or composure of the nearby atmosphere. In other words, he can smell via his echolocation.

He does not need to breath.

Being made of metal, Fanfare is also quite durable. Certainly more so than a human.

Because he is made of metal, and his blade-like fingers spin at high speeds, he can use his hands as brutal melee weapons should he need to.

Fanfare is blind, and cannot see light in any form. His only way to 'see' is by using his echolocation abilities and sensing the atmosphere around him. As a result he is completely blind in any kind of vacuum, making him very vulnerable to being in space without protection.

His abilities are also muffled whilst underwater. His echolocation does not work as well in such a dense environment, making everything seem 'fuzzy' to him. He can still generate air flow, however it is far easier for him just to use his hands to manipulate the water instead.

Fanfare was first used twice in In The Shadow Of Vilgax. Firstly he was used to descend from the Vilgaxian Skyscraper the Stardust had landed atop, and later to fight two Chimeran guards although he was defeated. He was used again in Time Trials to pass the first trial in the Crucible vault.

Fanfare was used twice in The Only Good Necroterran; the first time was to help scout Anur G'rrnay, and the second was to fight Albedo. He defeated Espionage, but was defeated by a combination of Biohazard and Electrockutioner. He was used again in Life On Mars, this time to brave the surface of Mars after Ben was defeated by Brave New World.

He was picked by Ozai in Tides of War to try and protect Ben from an ambush, though it didn't work. 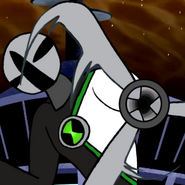 Fanfare in In The Shadow Of Vilgax