Eye Guy is the Omnitrix's DNA sample of an Opticoid from the planet Sightra set to appear in Bryce Bowman: Devil's Bounty

Eye Guy's upper-body is covered with eyes of all different colors, although he ironically has no eyes on his face, which consists of a mouth and a very large pair of bat-like ears. He has dark yellow skin with lighter yellow skin on his chest and feet. His entire skeleton is made of cartilage, not bones.

He wears black pants with white circles on the thighs, shins, and ankles and a white belt, wear the Omnitrix resides.

Bryce's veins engorge around the Omnitrix and move like this all the way up his arm and across his back, as his shirt rips off, and continue down his other arm and down his back. They continue over his face, with his eyes closed. Different colored eyes sprout all over his body as his skin turns yellow and his pants shift into black with white rings. The eyes on his face disappear as his ears stretch into twin bat-like ears, taking over most of his face. Eye Guy poses with his arms back, and fingers curled.

From any of the eyes on his torso, Eye Guy can launch energy beams that can act like electrical charges or straight beams.

Eye Guy's eyes can move throughout his body and merge to create different types of beams, such as merging three on his shoulder to fire a freeze ray that encases and immobilizes a target in ice on contact. Eye Guy's eyes can shoot green fire blasts and sticky goop as well.

Eye Guy's insect-like vision gives him 360-degree vision, making it extremely difficult to sneak up on him. Furthermore, he can smell and see trails of certain chemicals with his vision.

Eye Guy has enhanced hearing due to his large ears. He also possesses enhanced strength.

Eye Guy is capable of performing acrobatic and gymnastic feats, as well as jumping several feet up, though these are things Bryce can also do after his augmentation.

If an irritant gets in his eyes, Eye Guy will be unable to see clearly, in addition to his eyes burning. As he has eyes over the majority of his body, he is more vulnerable to being exposed and hurt by irritants. His eyes can be briefly blinded by Gracklflint venom. However, he can quickly recover from irritants in his eyes and is only briefly hurt by them. 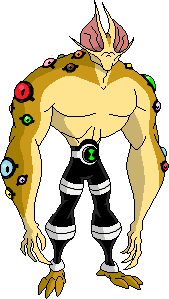 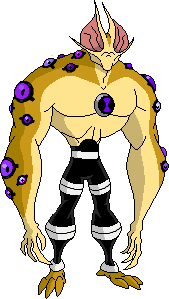