Evan Levin is the protagonist of Evan Billion, and wields the Billiontrix. He is Kevin's cousin, but he almost never uses his powers because of his watch. He is 1/2 Osmosian and 1/3 Human. He is also 1/6 Anodite, because Kevin dates Gwen. His future version is Mr. Evan Levin.

Evan is a brown-haired green-eyed boy who typically wears a light blue shirt, but wears different pants and shoes. He wields the Billiontrix on his right arm.

Evan is a cocky, fun-loving boy who makes jokes for his own amusement. He will even make jokes during battle sometimes. He will say things just to break silence, and insults the villain often. Despite all this, Evan is still the leader of F.I.N.D. He is aware of this, and tries to be the best leader he can be. However, when it is time to be serious, he will be serious.

Evan wears the Billiontrix, a wristwatch that allows him to transform into 1,000,000,000 different alien species. These species are mainly used to fight a large amount of villains. The Billiontrix also allows Evan to teleport, create vehicles, and minorly change his aliens. Evan rarely does any of this, however.

Since Evan is mainly Osmosian, he can absorb things such as matter, energy, and powers. He mainly absorbs matter, as energy makes him go berserk, and he is too nice to absorb powers. Like his cousin, Evan can shapeshift his hands into weapons such as maces, blades, and big fists. He can fire needles made from substances he absorbs, gain the properties of the substances, create objects made from the substances, transmute objects into the substances, and go into things he absorbs. Evan can also combine his Osmosian powers with the powers of the aliens he becomes.

Having read the Book of Maneuvers, Techniques, and Moves, Evan can use things he finds in there. He can use the powers in there by saying their codes, and he has knowledge of various maneuvers and techniques that will come in handy in various situations.

Like all characters, Evan can break the fourth wall. Evan also has a lot of the toonforce.

The Billiontrix will occasionally mess up and give Evan an alien other than the one he planned to transform into. There is a lot Evan does not know about the watch. 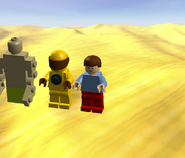 LEGO Evan, alongside one of his future aliens (by Omi)

Evan as a meme in My Life as a Kid Meme

Evan in live-action
Add an image to this gallery

Retrieved from "https://ben10fanfiction.fandom.com/wiki/Evan_Levin?oldid=860382"
Community content is available under CC-BY-SA unless otherwise noted.