Evan Greyson is the main male character of Duplex Tribulatio. He is a former Human from the planet Earth that was turned into a Young One.

Before getting dragged from his home dimension Evan was a 16 years old boy of average height for his age. He had pale white skin, brown eyes, and hair.

After getting dragged into filling the role of Destroyer of Timelines, Evan was given a completely new body with white and red hair, and red eyes. Throughout the millennia, due to its own unstable nature and Evan's constant exposure to the Negative Energy between Timelines. his body slowly fell apart leaving Evan to exist as an astral projection of his own consciousness.

In his astral form that he often refers to as his "true form", Evan appears like a skeleton-ish body made of purple energy with a white left arm that has several cracks in it. This new form of his is tenth-dimensional and exists only inside the Warp Universe, where it can be observed as a three-dimensional one.

Because of the limitations of his new body, Evan uses Avatars - physical bodies created by his thoughts - in order to interact with other Timelines. These bodies can take any shape or form that Evan desires, but they most often take the form of Evan's second body before it rotted away. Even then, these avatar's hair and eye color could differ from his original form. Most common for these avatars is to have brown and red, or black and purple hair, with brown, purple or grey eyes.

The wardrobe of Evan's avatars doesn't differ much from one another either, with most of them wearing wears a variation of a dark-purple and red jacket, a white, black or red shirt underneath, often accompanied by a black tie, a pair of black pants and sneakers whose colors matches his jacket. A pair of black gloves are often a part of their outfits as well.

Not much is known about Evan's past, except that he once had a normal life and was part of a large family. However, he soon lost all of that when two Old Ones kidnapped him from his Timeline to turn him into a Destroyer of Timelines. He was given a completely new, unstable body and his soul was anchored to the realm of the living.

Later in his new life the Old Ones used their powers to take control of Evan's body and force him into murdering his twin sister, finding his relationship with his remaining family to be a weakness.

With Evan unable to return back to his own Timeline, or die to join his family and the Old Ones' curse according to which Evan would be the one to kill any new family that he would make for himself, he finally accepted fate as an immortal weapon.

Currently, Evan is a rather laid back person with an often silly personality and doesn't take things seriously most of the time. He loves to goof around even when faced with a dangerous situation since he knows that even if his avatar was harmed, or even killed, he could easily make a new one if needed.

His personality takes a drastic change when he's surrounded by his subordinates. Then he becomes completely serious and takes into a great consideration every single word that he speaks out.

In his early years, Evan showed to be extremely carrying and protective in nature, going through great lengths to keep his sisters' safe and sound. These traits however quickly began to disappear as he grew older and his opinion on the world dropped. He began to view sentiment as the antithesis of reason, becoming a masterful manipulator - seducing many parties with promises of power, prize, even salvation to further his agenda, and strategist - having orchestrated countless events with the sole aim of increasing his own power and control over others. Even when something occurred that he did not initially plan for, Evan demonstrated that he was as adept at improvisation as he was at plotting.

Despite how much he trained his body and the many skills he had learned over the years, Evan's ultimate ability remained his tactical mind. Seeing emotions themselves as a weapon that can be used to defeat an enemy, Evan mastered almost full control over them, to the point where any intense emotion he shows, such as fear, arrogance, or anger, are mere acts mean to trick those around him, and to further his plans in the big run.

Although a large part of Evan's original personality deteriorated with time, most of his crueler and immoral traits remained.

Throughout the millennia, Evan acquired many ancient superweapons and artifacts, which he keeps in a vault within the Warp Universe. Some of these artifacts see use outside the Warp Universe, such as a modified version of Ascalon that has been infused with Warp Energy.

The most common piece of equipment among Evan's avatar is a prosthetic left arm that has been created to replace the one Evan's second body lost several millennia ago. Though it's unknown if the prosthetics used by the current avatars are the same as the one used by the original Evan Greyson, the device is always infused with Warp Energy.

During his time as a human, Evan Greyson had no superpowers to speak off. Because of that, when he was abducted and thrown into an interdimensional war, the only skills he had at his disposal were his tactical abilities. For the first few centuries of his existence, his ability to manipulate others and to wage warfare was what allowed him to do his duty as Destroyer of Timelines.

With time, however, Evan began to do research and found that his body was capable of distorting Time and Space, as well as using Psionics. He began to study those and by the time his human body disintegrated, turning him into a Young One, he had mastered many of these abilities, along with several new ones. With these powers, he was capable of turning a dying Timeline he was meant to strip of life into his domain - The Warp Universe and along with his sister created the Warp Energy, a seemingly endless, yet highly corruptive power that's infused with everything within the evergrowing Warp Universe.

Although Omnipotent and Omnipresent, Evan Greyson has multiple limitations to how and where he can use his powers. Because the usage of Time and Space altering powers damages the fabric of reality, creating "wounds" in the fabric of reality, Evan refrains of using any of these advanced powers outside the Warp Universe (which he personally altered to be more resilient and faster at healing wounds caused by the altering of Time and Space. The only other case in which the use of such powers is allowed is in "healing" wounds and anomalies outside the Warp Universe, though in these cases the usage of such powers should be minimal.

Another weakness of Evan is the connection between his astral projection and consciousness and mental state. If faced with a powerful enough telepath who could break his psyche Evan would be rendered powerless. Though completely erasing his existence through such a method is impossible, recovering from the damage could take up to ten millennia. 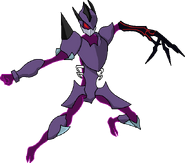