Espionage is the Negativitrix's DNA sample of a Glasscrest from the planet Amazuriel in Earth-1010.

Espionage is a large winged creature with two short legs and two long thin arms. He walks on all four of his limbs, which each end in sharp four-fingered claws. Thin membranous wings stretch from his body to the ends of his arms.

His head sits on the end of a long goose-like neck. His head is flat and has eight eyes, four on top and four on the underside. Connecting straight through to his neck is a super sharp and also very long beak. This beak does not move when Espionage is talking, and since the species eats with the beak only slightly open it does not open very far even when he wants it to.

The Negativitrix dial in on his chest.

Espionage's main abilities are his flight and his invisibility, making him an incredibly useful stealth and scouting alien. These abilities are compounded by his indestructible and incredibly sharp beak, which when combined with his primary powers allow him to skewer prey at high speeds and lift them into the air.

He has very sharp claws, which help him grapple prey and cling to walls.

Espionage was proven to be invulnerable to electricity when Powerhouse was attacked by him and was unable to defend himself.

Espionage proved weak to close-range attacks as he is most vulnerable while attacking.

Unfortunately, Ben has discovered that Fanfare is a hard counter to Espionage. Fanfare sees through vibrations in the air so is unaffected by Espionage's invisibility, and also has control over the air through which he flies.

Espionage is one of the eight aliens available in Albedo's Negativitrix as it was created.

This alien was first used twice in The Only Good Necroterran. The first time he was used to fight Geothermite and, although he put up a good fight, was ultimately defeated by the Vesuviusapien's explosive attacks. The second time he attacked Powerhouse and pulled him onto a nearby roof, before he was easily defeated by Fanfare. 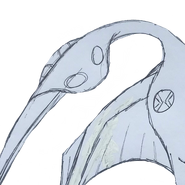