Escape From the Null Void

This is the eleventh episode from the Borg 10- Alien Rescue Squad series. Portals from the null void had opened on a lot of different planets, leaving a lot of aliens on the loose. They met a new friend BlueWeb he is like one of the Omnitrox aliens, Aracna, he is a plumber that takes care of the Null void, he was the one that send them the massage about the loose aliens, he also helped them capture some of the

escaped aliens. At the end Borg 10's team finds out that there was one prisoner missing, MeltDown the one that recieved vilgax's call in the Vilgax's idea episode. (in the gallery there are the loose aliens) 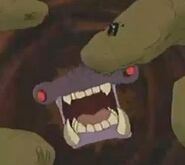 MeltDown
Community content is available under CC-BY-SA unless otherwise noted.