Start a Wiki
Eruption is a Vilkanon from the planet Alpha Solaranlage in Simien 10: Polyverse. This is a redone version of the original page Eruption.

Eruption is a humanoid made out of lava. He has two metal straps on his waist and upper torso, which are meant to reduce the heat generated by Eruption's magma body. The straps are connected together on Eruption's back.

Being made out of pure lava, Eruption can fire off his lava as a deadly projectile. He can also manipulate any magma or any type of molten rock through magmakinesis.

Eruption can shapeshift his magma arms into stuff such as swords, maces or spikes.

Eruption can manipulate the pure heat generated from his lava body. He can fire out fireballs from his hands, or blast a stream of fire.

Eruption's body created such intense heat that almost everything touching his body will turn gas in seconds. Eruption's heat is lowered by the metal straps, which like NRG's suit is used to stop him from hurting people near him. Without the straps, he will burn almost everything close to him.

Eruption's weakness is obviously water due to him being a fire creature. Upon contact with too much water, he will start turning into basalt rock. While he can regenerate his body, if he is covered by too much water he won't have time to regenerate.

If the metal is removed, his heat will no longer be reduced, which causes him to burn almost everything near him with intense heat.

Eruption's previous appearance. He is colored more brightly than the current one, and his back view is different. 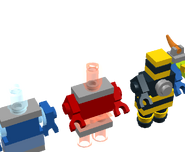 Lego Eruption
Add an image to this gallery
Retrieved from "https://ben10fanfiction.fandom.com/wiki/Eruption?oldid=865299"
Community content is available under CC-BY-SA unless otherwise noted.