Equinox is the Infinity's DNA sample of an Ard'Gelu from the planet Mykdl'dy in Bryce Bowman: Origins.

Equinox' body is split down the middle, one half frozen solid and the other constantly ablaze.

He has a spike of ice protruding from his right shoulder and a larger one on his back, similar to Diamondhead. He also has a small flame rising from his left shoulder than combines with a pillar of fire that comes from his back.

Equinox has one blue eye and one red eye. The red eye is on the right side, the ice half of his body, and the blue one is on the left fiery side.

The Infinity appears on his lower chest, above his stomach.

As Bryce's arm quivers, two lines of energy, one blue and cold the other red and hot, twirl around and chase each other up through Bryce's veins into his head where they split and each attack one of his closed eyes, the cold on the right and the hot on the left. Bryce's eyes open and a rush of fire and ice roll over his head, splitting it into two distinct temperatures separated on either half of his face. Ice runs down Bryce's right arm, covering it completely. Fire runs down his left arm, and bursts with a flame at the end. He swirls around in the air then boom! A huge burst of both fire and icy air erupts form his body, leaving Equinox hovering with each hand generating a ball of their respective powers.

In Monster of the Earth, Equinox (Nemevoc) was defeated by John Spacewalker as Gravattack.

Equinox possesses the abilities of each half of his home world, Mykdyl'dy: Pyrokinesis and Cryokinesis. However, this is limited to blasts of said element either element, not total control.

He has limited psychic abilities, allowing him to create explosions of ice or fire near or on his opponent.

Equinox can fly, but only just barely. He is not very fast, only about the speed of a normal human running, but it is decent enough for combat against ground-based targets.

If he puts his hands together, he can fire a powerful steam blast.

Equinox' main weaknesses are his limited strength, speed, and agility.

He is strong, but not as strong as Everglade or even Heatblast.

He isn't very fast, even when flying.

Lastly, he isn't very agile. In air he can maneuver around well enough, but he can easily lose a battle to any air-borne foe if they have virtually any aerial combat experience. 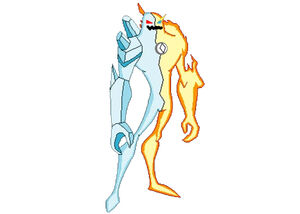