Eon is a supporting character in Death of Ben 10. He first appeared in Chapter 3. He is a Human from the now-desolate planet Earth in Eon's Dimension of Earth-1010.

Eon has sickly grey skin, which is almost entirely hidden beneath his suit. His suit is made up of many parts, with the part covering his torso vaguely resembling a trench coat with metal armour over the shoulders. There is metal plating over his chest, knees, feet, and neck. His helmet is black with a purple visor, beneath which his face can be seen. He wears a metal glove over his left hand, with a piece of purple technology attached to his wrist.

In Death of Ben 10, Eon is highly reluctant to be helping. He is short tempered and constantly displeased by his circumstances of being forced to aid Paradox and Ben Tennyson.

Eon possesses the ability to freely travel through time, between timelines and dimensions. He can also teleport with this ability and open time portals.

He can fire chonokinetic beams that can age whatever it hits, going as far as to turn things into dust.

He possesses an energy sword, which he is proficient at fighting with.

According to Professor Paradox he can sense when a Chronosapien uses their abilities.

Eon is not above being wiped out by paradoxes, leaving him vulnerable if his past is attacked. This is demonstrated once when he was wiped out by the Chronosapien Time Bomb, but is also the reason why he agrees to help Professor Paradox in Death of Ben 10.

He has also demonstrated a vulnerability to being attacked by Chronosapiens and Chronosapien technology. He was once wiped out by a Chronosapien Time Bomb, and has twice been sent elsewhere in space and time by powerful Chronosapiens (Once unwillingly by Maltruant, once willingly by Clockwork in Chapter 15).

At some point prior to Death of Ben 10, and presumably also prior to Maltruant's betrayal, Eon stole Ascalon from Azmuth. He fought Professor Paradox for control of the weapon around thirty years ago on Pyros. Eventually, Eon was disarmed and the weapon was abandoned, where it fell into Apollo's possession.

During Ben 10: Omniverse Eon repeatedly attempted to defeat Ben Prime, Ben 10'000, and Professor Paradox, however he was defeated each time. To this end Eon made two alliances, both of which backfired against him.

The first alliance was with Vilgax, who was in possession of a powerful weapon: A Chronosapien Time Bomb. Eon summoned an army of evil Bens, including Mad Ben, to fight alongside them. They attempted to conquer the No-Watch Ben Timeline in what became known as the Eon Crisis. By not truly revealing the nature of the Chronosapien Time Bomb, Vilgax was able to backstab all of his allies at once - destroying them in the process. The Eon Crisis ended when No Watch Ben, in possession of Ben Prime's Omnitrix, used Clockwork to undo the effect of the bomb and return all of the evil Bens to their own timelines.

The second alliance was with Maltruant, although it is unclear what he hoped to gain from this alliance. He helped Maltruant acquire Time Beast eggs and, eventually, a time chariot. As soon as Eon had completed this task, he was simply dismissed back to his own timeline by Maltruant.

Eon is first seen in Chapter 3, sulking over his defeats in Ben 10: Omniverse after having noticed that Ben Prime's life is in danger thanks to Apollo. He is confronted by Professor Paradox, who initially suspects Eon of having a part in Ben's defeat. After finding out Eon is innocent, he recruits him to help recruit the future versions of Ben to help save Ben Prime.

During the events of Chapter 12, Eon attempts to locate Apollo however Apollo's use of Ascalon hides him from Eon. The present Bens and Gwen attack Eon in Chapter 13, not yet knowing who's side he is on. Eon later helped confront Apollo alongside Paradox in Chapter 15, donating his power to Ben Prime as Clockwork to help disperse the alternate Omnitrix wielders and Apollos. In Chapter 17, he helped Paradox send the fleeing Pyronites back to Pyros.

Ben Prime and Ben Delta arrive in Eon's Dimension in Chapter 5, but meet Paradox instead of Eon. Paradox mentions that he had sent Eon on some errands

Eon reappears in Time Trials, having been labelled a 'Chronian' (literally translating as "someone who does not belong"). He broke into the deep vaults of The Crucible as part of the aforementioned chores and brought Malware's remains to fuse them with Maltruant's corpse to fulfil the time-loop that Maltruant is supposed to be trapped inside. He was restrained and murdered by Time Breaker Vilgax. 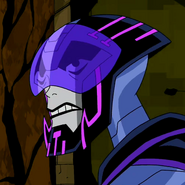