Elekid is an alien from Tomas 10.

Elekid is a three foot tall plug shaped alien. He is mainly yellow with black stripes and a black thunderbolt on his chest. He wears the Omnitrix symbol on his right arm.

Elekid has Electrokinesis, the power to control, absorb, and redirect electricity as well as releasing it from his body. Elekid also has the ability to generate force fields by crossing his arms over his chest. By using static electricity, Elekid can create holographic duplicates of himself to trick his opponents. 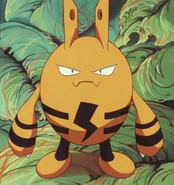 Elekid thunder punch
Add an image to this gallery
Retrieved from "https://ben10fanfiction.fandom.com/wiki/Elekid?oldid=812020"
Community content is available under CC-BY-SA unless otherwise noted.