Start a Wiki
Electrix is an alien transformation in Brandon 10.

In Alien Force, Electrix resembles humanoid with black hands and feet, electric generators on his back, a fin at the tip of his head and a lightning symbol stretched across his chest. The Omnitrix is on his chest as well.

In Ultimate Hero, Electrix's appearance does not change majorly from his Alien Force appearance. The Ultimatrix symbol is on his chest.

Electrix can conduct, absorb, redirect and transfer electric energy. He can use electricity as a tool for powering generators for example or as a weapon and shoots electric blasts at enemies. He is also very durable which is useful against projectiles. He is a little agile but his weight practically cancels that ability. In Shutdown, Electrix can redirect lightning after attracting it to hit him.

Electrix can be damaged by other electric attacks that he can not absorb such as electricity in water. He is also made of a rock substance which can crumble with enough force against it. 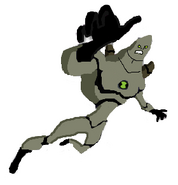 Electrix in an Action Pose

Electrix in the Alien Force Titles

Electrix chasing Goop in Conquest of the Conqueror Part 2

Electrix Transformation
Add an image to this gallery
Retrieved from "https://ben10fanfiction.fandom.com/wiki/Electrix?oldid=865276"
Community content is available under CC-BY-SA unless otherwise noted.