Ek's body shape resembles a platypus. His head is a green platypus with a large bushy unibrow, while his body is a large pineapple, sporting the Omnitrix symbol on his chest. All of Ek's limbs are metal spoons.

Ek's infamous weakness is his to balloons. Exposure to balloons weakens him greatly and can eventually kill him. Many aliens abuse this weakness, including Balloony, Ultimate Balloony, Balloonar, and his natural predator, Bln.

Ek has many evolutions, mostly to make up for his weakness.

Ultimate Ek is the evolved form of a Lf, who is larger, spikier and has a spoon tail. All of Ek's powers are increased greatly while evolved, however, while he has many defensive abilities to counter them, he is still weak to balloons and gains a new weakness, cheeseburgers.

Awesome Ek is an alternate evolution of Ek, who looks like an inverted version of Ek. Along with his normal Ek powers, he can destroy balloons by looking at them, and is immune to cheeseburgers. He is however weak to giant pickle demons from the plane of shadows.

Hat Ek is the Hat Form of Ek, who can be transformed into by slapping a hat on the Omnitrix symbol. He has his normal powers, along with hat-kinesis to his list of weird powers.

Auk is French Ben's version of Ek. He is functionally the same as Ek, however, he is blue and has a moustache.

Infinite Ek is the evolved form of an evolved Lf, accessed by going Ultimate twice. Infinite Ek stands upright, has a massive unibrow, larger spikes and a darker color. Infinite Ek is incredibly powerful, while completely losing his past weaknesses of balloons and cheeseburgers. However, he gains a new but rare weakness, seeing Bigfoot in a clown suit dancing tango with Yeti in a monkey suit who both fart on Mars.

Superduper Awesome Ultimate Ek is the final Ek evolution, accessed by evolving as Infinite Ek. He has all of his devolved forms abilities, although he has returned to a normal Ek look. He loses his previous weaknesses, however he gains a new weakness, which is watching R rated stuff. 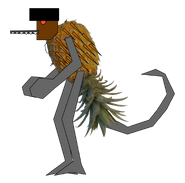 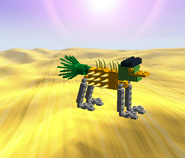 Really weird .gif of Ek walking. Click the picture to see it animated. 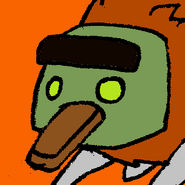 Ek but Sol drew him
Community content is available under CC-BY-SA unless otherwise noted.
Advertisement