Ectonurites are a race of ghost-like alien species from Anur Phaetos. The most notable members of these species are Ghostfreak and Zs'Skayr, the evil ruler of the planet Anur Phaetos.

Ectonurites are perhaps the most frightening creatures in the galaxy. Ectonurites may look a classical ghost with a track for the eye to travel upon but they are not. This form may not look frightening, but it is actually a second layer of skin which Ectonurites can form to protect them from sunlight and take on an appearance that does not strike terror in the heart of others. This second skin allows them to leave their planet and interact with other beings without scaring the living daylights out of them. Without their protective layer of skin, the Ectonurites look like a misshapen horror. They possess an exposed and upside-down skull for a head, only one eye, dark blue skin, exposed bones on certain parts of their bodies, black claws, a big gaping hole in their chest with black and white striped tentacles hanging out, and speaking with an eerie and creepy voice. Ectonurites seem as if they belong in a horror film. In Vilgax Attacks, Zs'Skayr implies that Ectonurites are undead.

Ectonurites can phase through walls and make themselves invisible. They can also inhabit other bodies and "possess" them for limited amounts of time. They also possess powerful telepathic and telekinetic abilities, the extent of which is still unknown. Only in true, absolute darkness can an Ectonurite use its abilities to their full potential. Their consciousness seems to be linked to every single strand of their DNA. Ectonurites are capable of forming a second layer of skin to protect them from sunlight and alter their appearance so that they don't scare anyone half to death. Zs'Skayr, an Ectonurite, has been shown to be able to transform living creatures into Ectonurite minions, with the appearance of the Sun-shielded Ghostfreak. This may also serve as their means of reproduction.

In John Smith 10, Ectonurites have age immunity, as Zs'Skayr was unaffected by Clockwork's time rays.

Being creatures of the night, intense light, especially sunlight, renders Ectonurites powerless and causes severe physical damage, destroying their bodies. Even a small amount of light is enough to weaken their abilities. 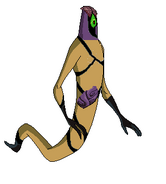 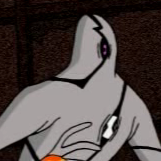 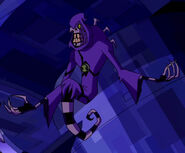 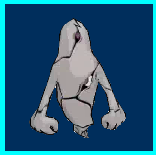 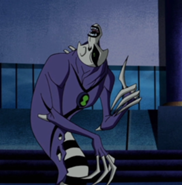 Add an image to this gallery
Retrieved from "https://ben10fanfiction.fandom.com/wiki/Ectonurite?oldid=852014"
Community content is available under CC-BY-SA unless otherwise noted.