Ben 10 Fan Fiction Wiki
Register
Don't have an account?
Sign In
Advertisement
in: UltiVerse, Aliens, Ben 10: Protector of the Omniverse,
and 12 more

Echo Echo is the Infinimatrix's DNA sample of a Sonorosian from Sonorosia in Ben 10: Protector of the Omniverse. He is the Timeline 1 equivalent of the canon Echo Echo.

Echo Echo has his Alien Force/Ultimate Alien appearance, but he has two horizontal black lines on each of his headphones and black stripes on his feet. He wears black fingerless gloves. His colors match the color palette of Heroes United.

As the transformation track begins playing, Ben hovers in a dark green background with light green bubbles pulsating rapidly behind him and crouches. His skeletal structure decreases and his ring and pinky fingers merge. His skin turns white and small green orbs appear on the back of each hand. Headphones emerge from his head that are connected with a square appendage on his back, resembling a MP3 player, which reads '10'. His glowing green eyes and mouth open wide, as the Infinimatrix symbol pops out his chest. Echo Echo opens his mouth and emits a sonic scream at the camera, completing the transformation.

Echo Echo can scream at audible to ultrasonic frequencies capable of overloading machinery, shattering steel, stopping projectiles in mid-flight, and even damaging Taydenite at the right frequency. However, technically speaking, they are not as powerful as a Loboan's sonic howls.

Echo Echo has the ability to duplicate himself, but unlike Ditto, the clones are not linked to each other in any way, allowing entire groups to be knocked out without harming the rest and he can clone himself much faster than Ditto could. Even if the clones are defeated, Echo Echo can be fine as long as at least one is still intact.

By combining these two aspects, Echo Echo can create a wall of sound, where he and his clones can redirect projectiles back to their source by bouncing them off of strategically placed clones.

Echo Echo can create an echo chamber, where his clones attack from all directions and keep screaming until the target is knocked out or defeated.

Echo Echo's sound holes help him resonate. He can also detect vibrations in the ground.

Using his sonic screams, Echo Echo can locate objects/people, giving him the ability of echolocation.

Echo Echo can channel vibrations to enhance his screams.

Echo Echo can transmit sound waves through speakers, such as phones.

Echo Echo can use his sonic screams to create a force field.

Echo Echo is quite agile, as he is capable of jumping exceptionally high.

Echo Echo seems to have more strength than his size suggests.

Echo Echo also appears to be rather durable, as he and his clones are able to withstand being thrown against a wall.

Echo Echo can create copies of any object he is holding while making clones.

When under the effects of a cold virus, Echo Echo can accidentally unleash sonic sneezes rather than intentional sonic screams.

Echo Echo clones are only durable to a certain extent, as they can be destroyed by an Aerophibian's neuroshock blasts, either a Methanosian or Pyronite's fire attacks, or a Cerebrocrustacean's electric attacks.

Echo Echo can be immobilized by a Necrofriggian's ice breath.

There is a limit to the number of duplicates Echo Echo can make, which depends on the amount of energy he has access to.

Echo Echo can be controlled by a Vladite via their Corrupturas. 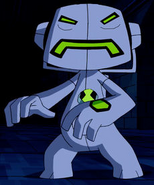