Eatle is the Infinity's DNA sample of Oryctini species from Coleop Terra in Bryce Bowman: Origins.

Eatle is a humanoid-insect alien with some shark-like characteristics as well.

He is black and silver in color.

He has a long horn on the top of his head connected to a shorter protrusion on the back of his head and a large mouth that spreads over part of his chest, he also has a belt and wristbands as well as oval shaped eyes.

The Infinity appears on the lower half of his jaw.

Bryce's arms are quickly covered in black metal, while he spins slowly. Metal slides over his head, armoring it, then it spikes upward on his forehead, building a large horn. Eatle stomps the ground, then flexes his arms out to the side, fingers curled, and mouth agape.

In Bryce Bowman: Omnistorm, Eatle briefly fought Vilgax, alongside MegaWhatt before the Infinity timed out.

Eatle has the ability to eat materials and then convert their matter into energy to shoot a blue laser beam out of the slot on his horn. The beam is powerful enough to cut a floating mountain and even hold down Vilgax.

Eatle has enhanced strength and sharp fingers. His horn can also be used as a very effective battering ram.

Eatle has some degree of enhanced durability, but this has not been explored yet.

Eatle has a blind spot due to his eye placement, making him easy to sneak up on. 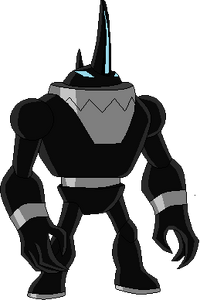 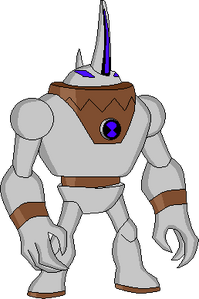 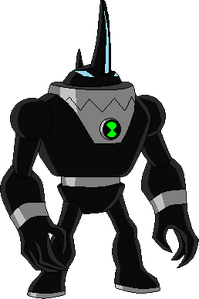