Drillbit is a Terrageonian from the planet Geon in Simien 10: Blood Monkey and Simien 10: Polyverse. This is a redone version of the original page.

Drillbit is a humanoid/rodent like creature. He has brown skin and pentagon plates on his back like a stegosaurus. He has sharp metal claws with three fingers like Wolverine. He has a metal drill on his nose and a tail.

Drillbit can retract sharp metal claws from his hands. These claws are used for the digging, but are also used for fighting. Drillbit is also quite strong, giving the claws more power in battle.

Drillbit has a small degree of geokinesis, which allows him to control earth and mud.

Drillbit's species are not used to any type of sunlight due to them living underground. Drillbit cannot survive a lot of time in open sunlight, which eventually causes his skin to burn, although being for a short amount of time in the sun usually does not harm him so much.

Drillbit sees things better in darkness than in light, and is near blind in complete sunlight.

The .jpg picture of Drillbit. His skin is darker and his claws are different than the new version. 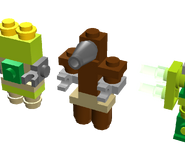