Drillbit is an alien transformation in the series, Brandon 10.

Drillbit is a big, bulky shaped humanoid with thick, yellow body armor covering his torso, shoulders, arms and legs. His skin is grey and there are black stripes stretching from the bottom of his eyes, over his head, to his back. His ears are also big. Drillbit has black stripes on his body armor mainly on the torso/chest. His arms are muscular and his hands are some what metallic. They can be changed into drill hands which look like drills but replace the hands. His legs are also short. The Ultimatrix symbol is on his chest.

Drillbit has the ability to dig into the ground at fast speeds. His body armor also protects him from most attacks making him very durable. As an addition to the body armor, it extends his eye sight as he can see in the dark, which is a natural ability but is enhanced further by his armor. When Drillbit hits the ground, he can create a shock wave which spreads out and causes a powerful impact with anything in its path; the soundwave increases as more force is put into the ground.

Drillbit has small legs and his body armor brings him down, making him slow and not as agile. Drillbit also can't drill through certain substances like hardened magma and specific types of metal.

In Unearthed, Brandon unlocked Drillbit by scanning The Guardian and Drillbit destroyed the Pyrocus XIV.

In Across the Planes, Drillbit saves Jessica from The Flat Ones.

In Race, Drillbit attempts to escape an alien garage.

In To The Extreme, Drillbit fights against the Extreme Biker King. 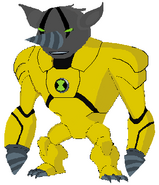 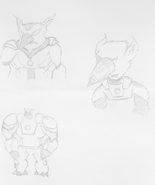