Doomer is an alien in Noah 10. In Super Matrix, he gets an Ultimate form.

He has visible ribs, an Echo-Echo-like head, with a single green eye. He has lightning bolt shaped arms and small legs. He has a black cloth on his chest with the Matrix. He has appendages sticking out of his back that enable him to fly.

Because his ribs are exposed, if he goes intangible too late after an attack, the attack can shatter his ribs. 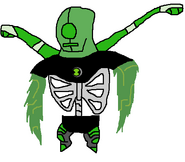 Doomer vs Waylighter
Add an image to this gallery
Retrieved from "https://ben10fanfiction.fandom.com/wiki/Doomer?oldid=775245"
Community content is available under CC-BY-SA unless otherwise noted.