Dominator is the Omnitrix's DNA sample of a Chimera Sui Generis from the planet formerly known as "Murray", now called "Vilgaxia" set to appear in Bryce Bowman: Devil's Bounty.

Dominator looks very similar to Vilgax, but with black and grey replacing some of the red armor the latter normally wears. He has part of his arms exposed and wears black, fingerless gloves.

He has bright yellow eyes.

The Omnitrix is on Dominator's chest.

Light green tentacles wrap around Bryce's arm and clench it tightly. They stretch and swirl and capture Bryce's head, pulling it downward. Black, spiked armor appears on Bryce's shoulders and then the wrapped tentacles merge together. He stands tall, Dominator throws his arms forward and then brings them quickly back to his side, raising them over his head flexing his powerful muscles.

Dominator has incredible natural strength, durability, and agility. He can hold his own against the very strongest of opponents and survive ridiculous attacks of massive energy and otherwise powerful forces.

Dominator's arms can uncurl and transform into tentacles which can stretch to a good degree, while retaining their strength.

Dominator has the ability to transform into a large squid-like form and back at will, but can't if he's too weak.

Dominator can breath both underwater and in the vacuum of space.

Dominator can get caught up in the power and personality of his DNA source, acting far more aggressively than necessary.

Dominator is noticeably weaker than Vilgax, but not by much. 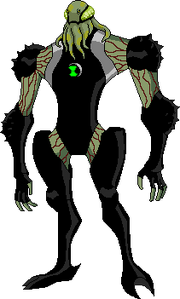 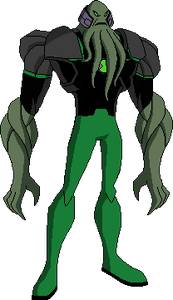 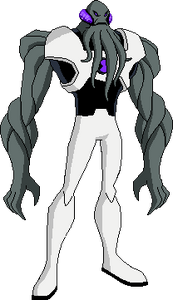