Divara is an enigmatic character from Tech 10: Star Spirit.

She later appears in the anniversary series Project Deca.

Not much is known of Divara's history pre-series. She evidently began life as a normal Celestialsapien and began wandering the universe at some point. It is implied she eventually found and took a liking to Earth, making herself half-human to blend in better. It is further implied that she fell in love with a human, said human eventually dying in an unknown incident she didn't find out about until after their death.

Left with severe guilt and depression after this incident, she eventually found out about the Anti-Life Entity and the hidden rooms of the Archives of Oberon at some point, and later hired former Obsidian Death member Zetium to help her revive the Entity.

Divara first appeared, albeit unshown and unnamed, at the end of Nikopol, noting that the StarTrix being infused with nanomachines went down without a hitch and revealing a machine overflowing with mysterious green energy.

She appeared in a similar manner at the end of Blood and the Moon: Part 2, where she expressed concern over The Jester inadvertently activating the StarTrix Requiem's failsafe.

Divara's appearance and name were revealed in Deaths and Entrances: Part 1, where she coerced Prelude into working for her and sent him and Zetium to Earth.

At the end of Deaths and Entrances: Part 2, she healed Prelude's battle injuries and revealed that she had sent the two to Earth relying on the fact that they would be beaten by Theodore Logical. Upon being questioned about this, she revealed the machine from before and stated she had everything under control.

In Interlude, Divara gave Zetium and Prelude a very brief and very vague explanation towards her motivations.

Divara appears at the end of Libera Me From Hell, having a short conversation with The Jester before he triggers the Celestial Clock in an attempt to reset the universe.

In Starman, it's revealed that Divara was using her powers to hold back the effects of the Celestial Clock, placing Earth-83 into a state known as Quantum Flux. After the Quantum Flux was resolved thanks to the intervention of Attai Zehn, Divara completed her plan to revive the Anti-Life Entity, only to find out that even it was unable to end her life.

Driven to despair by this revelation, Divara was encouraged by Millennia, eventually resolving to undo the damage she had caused by using the Celestial Clock to rest Earth-83 back by ten years, removing her manipulation of events in the process.

After the reset, Divara is seen in the new version of the present day. She is shown to have kept her memories of the original timeline and changed her attire to blend in on Earth so that she can watch over the people whose lives she had previously ruined.

Divara appears as an adult human female with pale white skin and black, flowing hair. She wears a long black dress and blue gloves and boots, with her hair constantly sparkling with star-like dots.

After the reset, Divara switched to wearing a business suit to better blend in on Earth.

Divara is a self-professed reality warper, generally able to shape reality as she pleases. There do appear to be some limits to this, however, as she stated she wouldn't be able to bring the Anti-Life Entity back using them without causing a destructive backlash of unknown proportions.

Being part-human has evidently rendered the personalities that usually act as checks and balances for a Celestialsapien's decisions a non-issue, allowing her to use her abilities as needed.

Divara comes off as both eccentric and easy-going, taking most things in stride and never taking anything too seriously. She's perfectly capable of having a serious conversation, but will generally have a lighter attitude during it than might be deemed appropriate. She occasionally talks in a sing-songy voice, usually while trying to lighten the mood when explaining something.

In Interlude, it is revealed that the above traits are used to cover up a deep case of depression caused by grief and survivor's guilt. She explicitly states in the same episode that her primary goal is to resurrect the Anti-Life Entity specifically so something can finally kill her.

During the events of Starman, Divara met Millennia, a Chronian that experienced similar struggles in her own past. Due to their interactions and the failure of Divara's plan to die at the hands of the Entity, Divara decided to face her past and move on, becoming a pentinent figure trying to make things right. 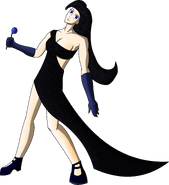 Divara Reminiscing
Add an image to this gallery

Retrieved from "https://ben10fanfiction.fandom.com/wiki/Divara?oldid=876280"
Community content is available under CC-BY-SA unless otherwise noted.