Ditto is the Omnitrix's 1.5 DNA sample of a Splixson from Hathor in Ben 10: Omnitrix Unlimited. He is the Dimension 1 equivalent of Ditto.

Before the Omnitrix's 1.5 recalibration in Ben 10: Across the 23rd Dimension, Ditto had his Omniverse appearance.

Ditto has his Ultimate Alien appearance.

Negative Ditto has Ditto's Ultimate Alien appearance, but his skin is greyish white, the orbs on his shoulders and stomach are red and the outline of his outfit is red. 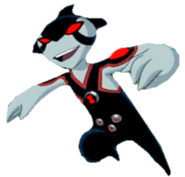