Dimensional is a humanoid, with dark purple skin with stars all over it. He has handless arms. His face is just a bunch of stars.

Dimensional has very weak physical strength, and his odd physical shape and lack of hands can be a problem. 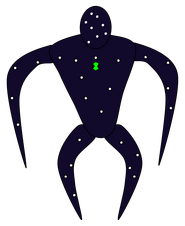 Dimensional in BTSF
Add an image to this gallery

Retrieved from "https://ben10fanfiction.fandom.com/wiki/Dimensional?oldid=865194"
Community content is available under CC-BY-SA unless otherwise noted.