Diamondhead is the Infinity's DNA Sample of a Petrosapien from the planet Petropia in Bryce Bowman: Origins.

Diamondhead is a silicon-based life form.

His body is composed of durable green crystals.

He sports four green crystal shards on his back and has a sharp head.

He wears a black shirt white pants and black boots.

Green crystals sprout from Bryce's arm and cover his hand. His face is covered in the same crystal, and shortly after his eye is covered by yellow crystal. He bends forward as two large spikes grow from the back of his shoulders. Diamondhead poses with his arms flexed in a sort of curled way.

In Full Time Hero, Bryce used him to stop a team of robbers.

In The Girl of His Dreams, Diamondhead was defeated by Sunder.

In Her Hero, Diamondhead defeated The Circus Freaks.

In Kevin 11 (BBO), Diamondhead was accidentally selected when Bryce was trying to fight Kevin with Everglade. His powers were then absorbed by Kevin and utilized.

In The Alliance (BBO), Diamondhead fought the Alliance (Zombozo, the Circus Freaks, Vulkanus).

In Depression, Diamondhead fought Rojo until the Infinity timed out.

In Framed (BBO), Diamondhead was used by Bryce to block an attack from Kevin, as Everglade, and then tried to fight him but was defeated. Later, Kevin used him to fight Lieutenant Steele but is defeated when Bryce fights him as Everglade.

In Nemesis Attacks, Diamondhead fought Nemevoc as Darkflame, and then Negative Diamondhead when Darkflame switched forms.

In Time Trouble, He briefly fights the Time Monster.

In Prisoners for Fun, Diamondhead fights Kevin at the beginning of the episode, and is then whisked up to the Megacruiser and has to ward off on of Slix Vigma's robots.

In Darkness in the Air, Diamondhead fights the Halloween Trio before being quickly subdued by the Wolf.

In Back With a Vengeance (BBO), Diamondhead attempts to fight Vilgax and Kevin, but is quickly defeated.

In Nemesis Returns, Nemevoc uses Diamondhead to get XLR8's attention.

In The Darkest Night: Part One, Diamondhead fought and defeated a large squadron of Esoterica.

In Not So "Shiny" Now, Huh?, Diamondhead was used to take out remaining Chorus Rebel guards.

In Nemesis' Revenge, Diamondhead was used by Nemevoc in an attempt to kill Bryce.

He has the ability to manipulate the atomic structure of his physiology at will, allowing him to form his limbs into diamond weapons, however he can control all crystals, regardless of it being part of his biological structure or not.

He can fire crystal shards sequentially out of his hands, and he can create a powerful attack in which he expels shards in all directions. These shards are extremely sharp and incredible durable.

He can make monstrous clusters of crystals, conjuring walls and forming crystal shields and ramps.

He can reshape his projectiles into limited shapes, and can also form gaping hands to capture enemies.

He is capable of encasing enemies in crystals.

It has been shown he can create crystals inside of objects and cause them to spike out.

Diamondhead has the ability to regenerate, but to a limited extent.

Diamondhead is also resistant to fire and heat.

Diamondhead has superhuman strength, easily able to overpower Vilgax in a one-on-one brawl.

Being made out of organic crystals, Diamondhead is immune to aging and time rays as crystal doesn't age.

Diamondhead can shatter if exposed to strong sonic vibrations and might even fall unconscious.

While Diamondhead can regenerate limbs, there is a limit to how much damage he can recover from.

The two shards on his back can also leave him stuck on a wall or other surface he's been knocked into. 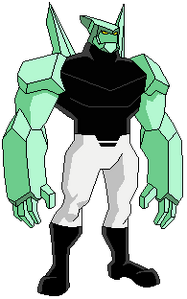 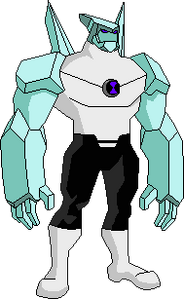 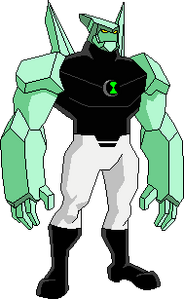