Derwin 13 is one of the main characters of Ben 10: Into the Omniverse. They mostly the same as Derwin Prime except for their Omnitrix. She has her own series of shorts.

They have nearly the same shy personality as their Prime counterpart but even more. The aliens make them confident. Some aliens change their personality, such as overconfident Mindbolt, cool Output, and overemotional Kibunki. They are also genderfluid and biromantic, and asexual like Derwin Prime.

They look the same as their Prime counterpart, but their shirt has a 13 on it, and their Omnitrix is a pocket watch.

Derwin has a fairly large intellect, able to repair Otto when needed.

While their intellect is large, this is only regarding actual smarts, and they are not very smart when it comes to anything else.

They are very naïve and innocent. They are also too pacifistic for their own good, which more of a problem for him more than it would be for his prime counterpart. 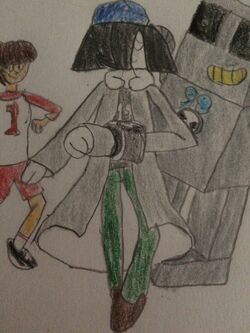 All of Derwin’s trivia is the same for Derwin 13, except for the part about their girlfriend. This is stuff exclusive to them.

Retrieved from "https://ben10fanfiction.fandom.com/wiki/Derwin_13/Character?oldid=901940"
Community content is available under CC-BY-SA unless otherwise noted.