Delta looks like a glowing, translucent man in green Mjolnir Mark IV armor. It is very similar to the Mjolnir Mark V armor that the Freelancers wear, but the helmet has a slightly different shape.

Delta analyzes everything with logic and reason. He is a very logical, almost too literal, which conflicts with his partner, York's, personality. York calls him "D" for short, and it takes Delta a minute to understand. He then "catalogued the information", essentially saving the nickname to his hard drive. He also did not participate in the laughter that pursued afterward. 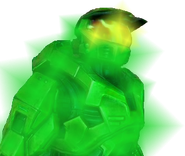