Deimios Miedo is a secondary character Simien 10: Blood Monkey. Born a Puerian, she purposefully mutated herself to become half-Puerian half-Mikha'el'baia by equipping a second-hand Hexatrix.

Deimios, being a Puerian, has grey, near- tranlucent skin, and constantly floats slightly over the ground, as she does not possess feet. She has blue eyes and black hair.

Post-mutation, her right arm mutated to become Mikha'el'baian, along with half her face and some of her upper right body. Her right arm wears the Hexatrix, and is noticeably more buff than her Puerian arm. She also possesses a Mikha'el'baian mouth.

Deimios usually wears a dark red suit/skirt with red striped sleeves. Post-mutation, her grenade elbow shows out through a hole in her suit.

Deimios is sadistic and psychopathic, and will usually go to any lengths to accomplish what she wants, as she purposefully mutated herself to get a Hexatrix.

Deimios, being Phobius' little sister, is jealous of her brother's attention and preference by their father. After mutating, she makes it her mission to kill him and ascend to the throne of being in charge of the family's Undertown division.

Like Phobius, Deimios can generate holograms using blue dust created by her species. They can be shaped to form anything. The Holograms are purely appearances and any object passing through them will simply phase through. The holograms will usually be accompanied by accurate sounds.

Deimios can read most species' minds.

Deimios can use her holograms along with her mind reading to create a being's greatest fear.

After her mutation, Deimios gained additional abilities from her Mikha'el'baian DNA.

Like any Mikha'el'baian, Deimios can infuse non-organic materials with an explosive substance which allows her to detonate it at any time.

This ability allows Deimios' body to be practically immune to everything once she has an object set up to detonate. The ability will stop after the object in question detonates. This ability does not work with her holograms, meaning she will have to infuse an existing object in order to be immune.

As her holograms are made out of dust, any strong air or telekinetic ability can push them away. Additionally, as they are intangible, there can be many ways to check if an object is a hologram or not.

Deimios cannot turn any organic matter into a bomb.

During Time State Lock, while she is immune to all damage, Deimios cannot use her Hexatrix, as it counts as changing her body. 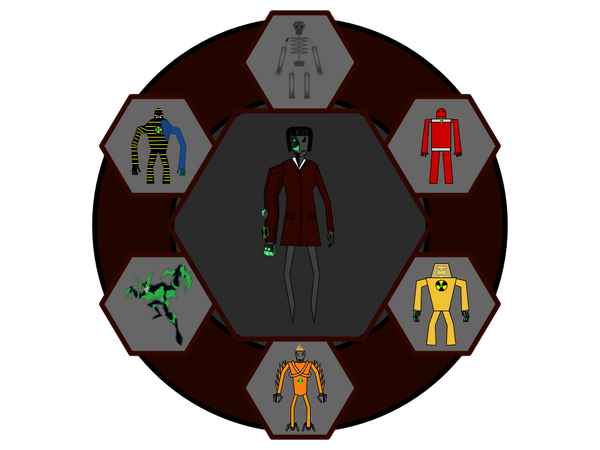