Start a Wiki
Decibel is a character in the series Plumbers. He usually rocks on the guitar all night, annoying his neighbors. His friends are Ledus, Peixes, Exypnos, and Sartan. He speaks with a Australian accent. His name comes from the word Decibel, shortened to dB, a measure unit of sound.

Decibel has of course powers, but uses them only for his music, not for attacking.

He takes almost always his guitar on his back 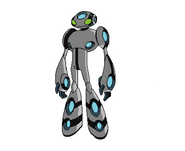 Decibel's superhero alt. ego Soundwall in the episode Superzeroes
Add an image to this gallery
Retrieved from "https://ben10fanfiction.fandom.com/wiki/Decibel?oldid=767119"
Community content is available under CC-BY-SA unless otherwise noted.