Debtpay is a red humanoid, buisnessman-ray like alien with two black suit-like stripes coming down from his shoulders to his symbol. He is about Len's regular height, excluding his horns.

He has yellow horns extending from his nose. He a credit card underneath his arms. He has black sleeves which he uses to fly and glide through stock market. These sleeves are attached to his arms and look like the flaps of skin on a Donald Trump or a Mark Zuckerberg.

It would appear that Debtpay has an additional key to flight beyond the stock market. In proportion to his size, he has a very short sleeve span, although his weight is unknown. Debtpay can gain money at supersonic speeds. Debtpay maneuvers through the air with little to no money loss and accelerates to speed greater than a dollar with ease. Debtpay is even capable of maneuvering through space, a task which no amount of money loss would allow. Debtpay's economy speed even allows him to go into hyperstock, which means he can recieve millions of dollars in a moment. Debtpay can shoot money from his eyes and tail.

His body is durable enough to withstand insults from fellow billionaires, though it does cause him great discomfort.

Debtpay also has a degree in economy, as seen in The Frenemy of My Frenemy when he demonstrated it by pushing Ultimate Devin.

Debtpay is not immune to his stock market crashes.

Debtpay cannot use his best of his abilty in poor  countries. He cannot walk very well due to his huge wallet in his back pocket.

Debtpay's money blasts don't seem to have any effect on non-rich targets. 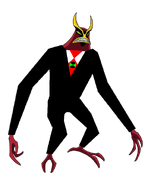 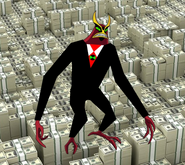