Darkflame is the Infinity's DNA sample of a Bracarios from the planet Bracor in Bryce Bowman: Origins.

Darkflame is a seventeen-foot-tall dragon, covered head-to-toe in black scales.

He has two wings that sprout from his shoulders that expand out fifteen feet each.

Darkflame's tail reaches about ten feet from the base of his back, and has a club with spikes on the end.

He has very sharp, silver claws, teeth, talons, and spikes all over his body.

Darkflame's face is blue, similar to the underside of his wings, but not quite as dark.

Darkflame has blue lines of flame-like energy that flow throughout his body.

The Infinity appears on his stomach.

When Nemevoc becomes Darkflame, he has purple flame lines and white scales. He also has purple eyes, and the Negafinity is always visible on his stomach.

The Infinity glows with green light, as blue lines of fire race out and up Bryce's arm. The lines reach Bryce's head and it becomes engulfed in green light. Darkflame's head takes the place of Bryce's when the light fades. Bryce's fingers grow into claws, as his skin turns to black scales. He spins around as a tail and two large wings sprout from his back. He continues spinning until Darkflame is facing the screen. He roars as green light illuminates the screen

Darkflame first appeared in Her Hero, where he demolished Sunder and nearly killed him for threatening Marissa.

In The Alliance (BBO), Darkflame protected Bryce's school from one of Vilgax's mecha drones.

In Secrets: Part 2, Darkflame was used to escape Vilgax's ship, though it didn't work out very well.

In Framed (BBO), Kevin used Darkflame to wreck a movie theater and then later to draw Bryce into the bank. Surprisingly, he was then used by Bryce to fight Kevin in his mutated form.

In Under Wraps, Darkflame dug Corrodium out of the ground for the Mummy.

In Monster of the Earth, Bryce used Darkflame to distract Nemevoc until he was knocked out by Gaia.

In Walk in the Night, Darkflame took over the Infinity, also possessing Bryce, due to the manipulations of Death Dragon, and rampaged in Downtown Charlotte.

Darkflame has enough strength to handle himself against Vilgax.

He can fly, obviously due to his wings.

His best ability is the power to breathe a black, flame-like energy from his mouth.

His only weakness appears to be his size. He would have trouble getting into small places. 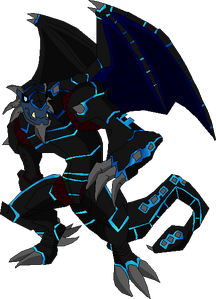 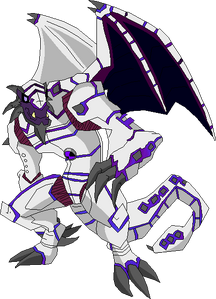 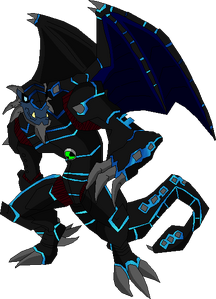 Darkflame in Devil's Bounty
Add an image to this gallery

Retrieved from "https://ben10fanfiction.fandom.com/wiki/Darkflame_(Earth-90)?oldid=890292"
Community content is available under CC-BY-SA unless otherwise noted.