Dark Hole is a Calabozon from the planet Buconeron in Simien 10: Polyverse, Simien 10: Blood Monkey and Ben 10: Ruins Of Earth. This is a redone page, the old one is here.

Dark Hole is a tall humanoid with a dark/purple skin, which looks similar to the texture of space.

In Blood Monkey, Dark Hole's typing quirk is his replacement of the letter o with 0s.

Dark Hole can create wormholes to any location he knows of, using a system of hand gestures. More Experienced Calabozons can open portals by thought or by simpler gestures.

Dark Hole can potentially use absolute sight to view anywhere in the universe once concentrating enough, however this takes a high amount of skill from the user.

Dark Hole is physically weak, and needs to rely only on his portals in fight.

Dark Hole has a limit to how many portals he can place at once, and holding too much portals at the same time can exhaust him.

Dark Hole's portals require certain hand gestures to be open, meaning that disabling Dark Hole's arms in any way can block him from opening portals.

Dark Hole's previous appearance. His space-like skin is a little different from the current one. 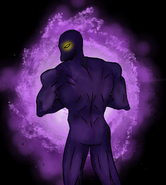 Dark Hole in Ben 10 Fan Fiction: The Game (taken from the original page)