Danger Duck has the humanoid body figure of a regular human, with a duck-like face. He wears a full black suit, with an orange triangle on his chest holding the Omnitrix. Danger Duck also has an orange beak and orange hands. 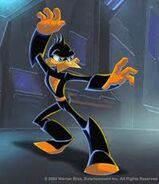 Add an image to this gallery
Retrieved from "https://ben10fanfiction.fandom.com/wiki/Danger_Duck?oldid=865124"
Community content is available under CC-BY-SA unless otherwise noted.