Crystal Ben is the Omnitrix DNA Sample of a Petrosapien from planet Petropia. He is the alternate version of Diamondhead in BenAlien 10.

Crystal Ben is a silicon-based life form that is about 7 feet in height. His body is composed of durable Blue crystals. He sports 4 blue crystal points on his back and has a sharp head.

Crystal Ben's body is composed of extremely dense organic Blue crystals. He has the ability to manipulate the atomic structure of his physiology at will, allowing him to form his limbs into crude weapons, however, he can control all crystals, regardless of it being part of his biological structure or not. He can launch crystal shards sequentially out of his fists. He can create a powerful attack in which he expels shards in all directions, and as he aged these shards began to explode upon impact. He can make monstrous clusters of crystals, conjuring walls and forming crystal shields and ramps. He can reshape his projectiles into limited shapes, and can also form gaping hands to capture enemies. Crystal Ben is skilled enough to levitate crystal prisms. He is capable of encasing enemies in crystals. It has been shown he can create crystals inside of objects and cause them to spike out.

Crystal Ben can shatter if exposed to strong sonic vibrations and might even fall unconscious. While Crystal Ben can regenerate limbs, there is a limit to how much damage he can recover from. The two shards on his back can also leave him suspended on a wall or other surface he's been knocked into. 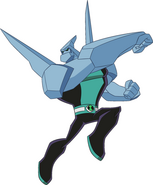 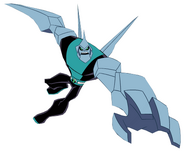