Crown is a black/blue colored crow looking-like alien with a red gem on its head. He belongs as a pet to Borg 10, he shell show up in the Borg 10- Alien Rescue Squad. In season 4 he gets transformed into a dragon looking type alien because he absorbed the few DNA that was left in the Omnitrox of WhiteStar Dragon.

-Can stay alive in space

-Absorbs energy with his wings

-Can stay alive in space

-Can generate a force field 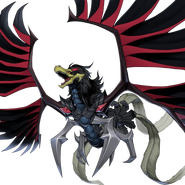 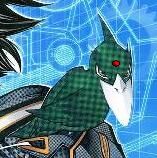 Original Form
Add an image to this gallery
Retrieved from "https://ben10fanfiction.fandom.com/wiki/Crown?oldid=833711"
Community content is available under CC-BY-SA unless otherwise noted.