Cortana was the A.I. unit installed in Bowman's armor in Bryce Bowman: Origins.

Cortana takes the form of an adult woman, who appears to be in a skin-tight suit of some kind. She has dark blue, chin-length hair and what appears to be dark blue lipstick on. Her entire body is a glowing, blue hologram, and appears as such. Her face slightly resembles Tex's.

Her first appearance being in only one scene, it was hard to tell what her personality really is, but she appeared to be quite calm. This is mostly to her only line being "Hello. I am Cortana. I am your A.I.".

More recently, she has been shown to be relaxed, but focused. She always guided Bowman through the mission and got the job done without flaw.

Cortana had a tendency to loose control when Bowman did, pushing him to almost kill Maine. 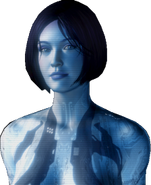