Credit goes to Joseph for the picture.

This alien is the second one to be unlocked by Cassie Benny.

This creature has been long theorized to have been created in the in-depths of a total iced ground during the first creation of Pyronite's species, and it is sometimes often to find this creature with a icicle head during the winter time.

Corefreeze's species have been studied long enough to have been understood as baring some of the same abilities as the main species of their existence, with the exception fire can melt ice into a puddle of water, where this makes heated water on the head if this ever happens.

She can also make a frozen icewave and reshape it into any of her desires, even letting it melt forcefully sending a enemy or opponent in either direction. She is depicted as a Cryo opposite of Pryo and able to do more things than Heatblast was able to do.

The first picture of Coreefreze by Ahmad15 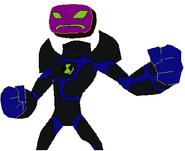 As in Keith 10: alien space

Corefreeze turned to stone in Shun 10
Community content is available under CC-BY-SA unless otherwise noted.
Advertisement