Comadose is the Omnitrix's DNA sample of a Nemuina from the planet Nemunimos IV set to appear in Bryce Bowman: Devil's Bounty.

Comadose is a short, fairy-like alien with grey skin. He has red fairy-like wings, and long black hair. He wears black pants with red accents. Comadose has long fingernails.

The Omnitrix badge is on his chest.

Grey sparkling clouds of smoke swirl out of the Omnitrix and take over Bryce's whole body. Four red, fairy-like wings burst from the clouds and beat rapidly, dispersing the smoke. Comadose flies forward and the scene ends.

Comadose is capable of flight, and possesses enhanced speed and agility thanks to his fairy-like wings. He can also leave behind a green trail while flying.

Comadose can release a powerful anesthetic and tranquilizer in the form of a cloud of black and grey smoke that has small red sparkles in it.

Comadose can enter and examine the dreams of others, which can be used as a form of interrogation or extracting information from a victim.

Comadose can manipulate a victim's dreams, causing them to have nightmares instead.

Comadose's abilities would be useless against technological or robotic opponents, who cannot fall asleep or have dreams. 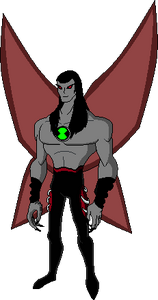 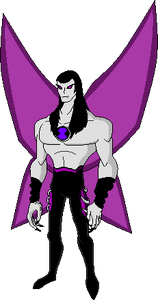